This author has not yet filled in any details.
So far admin has created 24 blog entries.

Our founder and CEO, Mallory Even, graduates from the Goldman Sachs 10,000 Small Businesses Program this evening! It has been an awesome 5 months of learning, networking, and finding new ways of continuing to be resilient during a global pandemic! The MMT team rewrote this classic to help celebrate Mallory and Cohort 14 … We hope you enjoy!
admin2020-12-09T23:09:41+00:00December 9th, 2020|MT Advocacy, Singing Gram, Small Business, Teletherapy, Uncategorized, We Can Help|
Read More

As I think over this past year, I feel overwhelmed by the collective loss of normalcy that we have all experienced.

Simultaneously, I feel overwhelmingly grateful for our clients, patients, business partners, and colleagues, for sticking by us through these very hard, yet very meaningful times.

Now more than ever, we want to express our gratitude for you, your families, your passion for the services we offer, and for your faithfulness to our company.

We wish you nothing less than joy, happiness, and togetherness with the ones you love this season and in the new year.

Stay well, stay healthy, and please let us know how we can continue to support you.

With sincere gratitude and love, 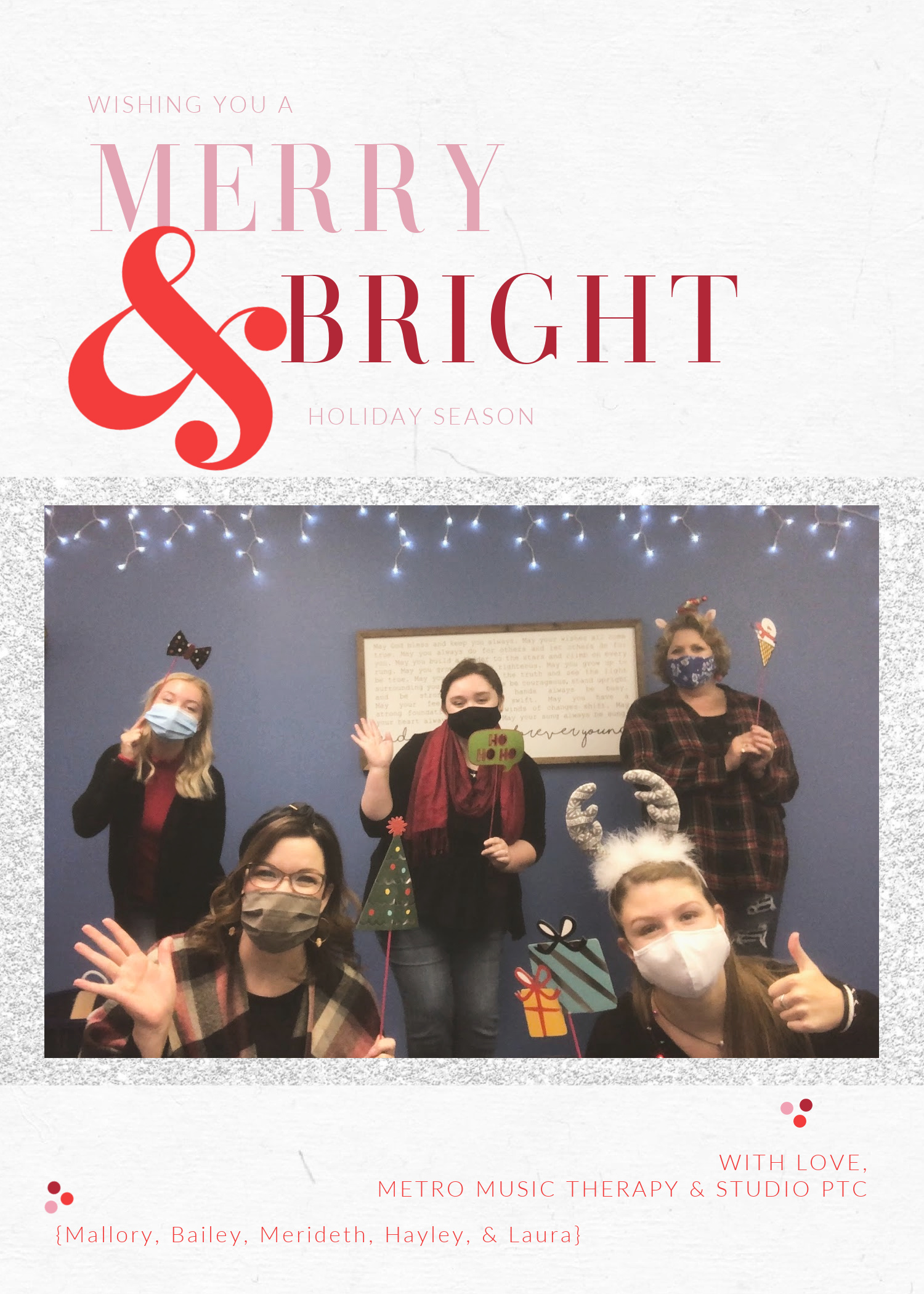 Another Year of Amazing …

I will never forget the day this summer …

… that I received a phone call from the mother of a 13-year-old who had a terminal diagnosis. “I know that music therapy is effective for my child, but we cannot afford services on top of all of the medical bills. Is there a way that you can help?”

Because of our partnership with Wellspring International, my answer was, “Yes, we can help. We will have a music therapist come out to your home this week and begin services at no cost to you and your family.”

We received word last Friday that our grant-funded music therapy program, Songs of Hope, will be funded for the next fiscal year by Wellspring International (October 1, 2016 through September 30, 2017).

What does this mean for Atlanta?

It means that hospice patients and their families, bereaved children, and refugees that are currently residing in Atlanta, will all have access to music therapy services at absolutely no cost to them.

It means that patients and their families can be supported during their darkest and most difficult times. It means that children can begin their healing process and have a supportive presence throughout their grief and loss journey. It means that refugees of all ages and from all over the world can receive support during some of life’s hardest transitions.

How has Songs of Hope already made in impact in Atlanta?

One of our partner hospice companies, Ark Hospice, says this of the Songs of Hope Music Therapy Program:

Our Ark Hospice team is truly so thankful for the services that MMT has provided to our patients and families. We have seen how their calming presence and therapeutic sessions have improved our patients’ lives. They’ve helped our patients with pain management, encouraged healthy coping skills, improved their quality of life and have facilitated emotional expression, reminiscence, and life review.

They also served many of our patients individually, and one particular patient struggled through a period of depression related to feeling purposeless in life. As Sam continued to meet with her and connect through music, he was able to help restore some confidence in her spiritual purpose and was able to provide healthy distraction from her anxiety and physical pain. He taught her coping skills that she was able to use when our team was not there to provide reassurance. She always talked about how much she enjoyed his visits and how she felt calmer and more at peace as a result.

Another patient was unable to speak English –  Spanish was her native language. Erin quickly volunteered to provide services to her and was able to play Spanish hymns and folk songs. Though this patient was nonverbal and Erin was only able to provide a few sessions before she was off of hospice services, her family was extremely appreciative and truly believed that her quality of life was greatly improved during her final weeks of life. They even asked Erin to play for her Memorial Service.

I know that these brief stories cannot adequately capture all that MMT had done, but I hope that they provide a snapshot of how music therapy has impacted our hospice patients throughout their end-of-life journeys. Thank you again for all that you do at Metro Music Therapy!

We are honored, humbled, and thrilled to be able to continue our partnership with Wellspring International in order to make a positive impact in the lives and hearts of the people of Atlanta.

We are so excited to announce the start of our Fall 2016 Children’s Grief & Loss Groups!

Children affected by the death of a loved one can experience a wide array of emotions and feelings that are often too complicated for them to process on their own.

Our Board-Certified Music Therapists have specialized training in grief & loss music therapy. We lead music therapy groups which are designed to carefully and intentionally help each child move through the stages of grief in a safe, creative, and caring environment.

These Fall 2016 groups will take place on Wednesday evenings with Kally Ramminger.

Metro Music Therapy is thrilled to announce the details of their newest project that is being completed with the H.E.A.R.T. strings Perinatal Bereavement and Palliative Care office at Northside Hospital.

The MMT team and H.E.A.R.T. strings have been working for months to write original scripts and original music for a Relaxation CD for parents who have lost or are anticipating the loss of their baby.

The CD will be finished in the Fall of 2016 and once completed, will be available for public purchase. Proceeds will benefit H.E.A.R.T. strings patients at Northside Hospital.

5 Dos and Don’ts for Advocacy in the Community

So I leave you with a challenge- try to implement one of these strategies the next time you find yourself advocating for music therapy. Which will likely be tomorrow. 🙂

This post is a part of the 2016 AMTA/CBMT Social Media Advocacy Month. Head over to the project website to read more advocacy blog posts! #mtadvocacy

A few weeks ago, Sam and I had the honor of traveling to St. Simons Island to attend the Georgia Health Care Association’s Annual Social Worker’s Meeting. We were invited to this conference to view the film, Alive Inside, with the conference attendees, and we presented immediately after about the benefits of music therapy for patients and residents in long-term residential care. I want to tell you what we observed, learned, and have taken away from this experience!

First and Foremost, let’s address the elephant in the room: Why do Music Therapists get so fired up about the film, “Alive Inside,” and the hype surrounding it? If you are a music therapist, you know what I mean. If you are not a music therapist, you might be confused as to why our field is a little on edge about this film. I think our collective defensiveness is based off of this simple idea: the common public perception is that the Music & Memory program IS Music Therapy. Many friends and family members have been thrilled to share the news of the film with us, saying, “This reminded me of you and of the work you do!” — and while that should be a compliment, we get defensive because our field is often misunderstood.

During our presentation, I told the room of social workers that as a musician, I was excited to see the seniors in the film receive access to their favorite music. As a music therapist, however, I saw missed opportunities to address clinical goals such as reducing isolation, increasing opportunities for socialization, memory recall, verbal processing, making emotional connections with family members, life review, and improving overall quality of life. This is why the iPod program is not a replacement for music therapy services.

One example of this “missed opportunity” involved Henry, the elderly gentleman with Alzheimer’s. The facility staff described him as being confused and isolated most of the time, a very typical description of any individual with dementia or Alzheimer’s. When the staff placed the headphones on Henry’s ears and began playing his favorite music, Henry became “alive” – he truly lit up. His affect became bright and his eyes flew wide open. He began singing (beautifully), and then recalled memories about the music he was hearing. So why would I call this a missed opportunity? If you watch the room while Henry is having this experience, you see other residents sitting around him, craning their necks with genuine interest to see what Henry is doing. You see Henry, a man who is typically isolated, becoming even more isolated while he closes out the world to listen to his music, completely by himself. I saw this moment as an opportunity to send in a board-certified music therapist to facilitate a group session which would incorporate everyone in the room in any capacity. Henry would then be able to share his memories and experiences with his peers – something that is nearly impossible for him to do when his memory is not livened by the music.

So, Music Therapists should be defensive then, right? I don’t believe so. This film shows us the positive power that music holds over our minds and memories. I wholeheartedly believe that every human should have access to their favorite music, and should be able to listen to it whenever they want. I also believe that Music Therapy is an effective clinical treatment option and – hear me – should not be implemented in a unit or facility all day every day. We work on clinical treatment goals and our patients and clients get exhausted. They need a mental, physical, emotional, and spiritual break. Just as a physical therapist shouldn’t be with a patient all day every day in order to let the body rest and restore before the next session, we can’t be with a patient 24/7. Music Therapists listen to me carefully: we cannot have it both ways. Let’s be very careful not to contradict ourselves. We can’t ask the world to view our services as something different than music entertainment (which it is!) and also get upset or offended when a facility brings someone or something in to act as entertainment. So we shouldn’t be defensive when a facility with whom we work brings in an iPod program, as long as that program isn’t meant to replace music therapy services (if it is, we need to better educate on the differences between the two, and the exclusive benefits of both).

This is why I believe every facility will benefit from having a music entertainment program (be it iPods, live musicians, etc) AND a music therapy program. People need to listen to music leisurely and for entertainment, and in a separate time and place, patients and clients with any diagnosis should have access to music therapy services to address their treatment goals. It shouldn’t be a choice between one or the other – it should be both.

Music Therapists, we have come a long way in the past 60-70 years. Think about how much further we can go if we were to view music entertainment programs as allies, and not enemies!

*Want to learn more about approaching and educating facilities on the differences between an iPod program and Music Therapy services? Attend the MMT Academy Spring 2016 course entitled, “Music Therapy & iPods” taking place in Atlanta and via live streaming on March 13, 2016! More info announced here on 11.12.15

Where will MMT be this Fall?

Check out what we are up to this Fall – join us when and where you can!
{If you need more information about any of the events below, just email us!}